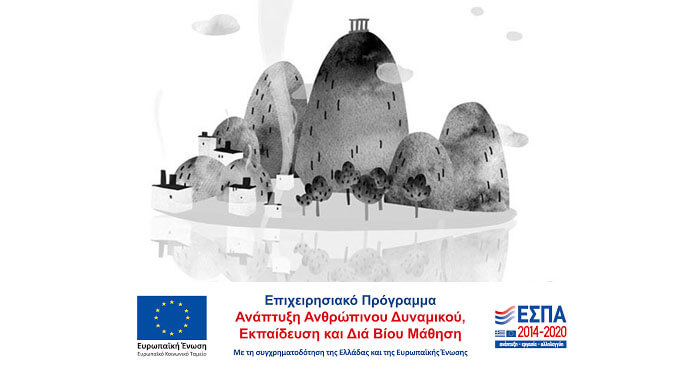 Τhe meeting ANIMATION & ENVIRONMENT is implemented through the Operational Program "Human Resources Development, Education and Lifelong Learning" and is co-financed by the European Union (European Social Fund) and Greek national funds. Its co-funded projects deal mostly with the improvement of education and employment in Greece. Its main targets relate to the development and promotion of human resources skills, activities against unemployment, strengthen social cohesion and social inclusion of vulnerable social groups, improvement of the quality of education & lifelong learning, awareness on environmental education, linking education with the labor market.

The entrance to the meeting and the tribute is free to the public and accessible to the people with disabilities.

Under the Auspices: Arts & Sports Organisation of Municipality of Vrilissia

In collaboration with: "Cine DRASSI" Cine Club of Vrilissia

– Department of Product and Systems Design Engineering, University of the Aegean

– The collaboration between the Department of Graphic Design TEI Athens, lesson animation, with “Archelon” the Sea Turtle Protection Society of Greece and Hellenic Ornithological Society. Experiences and results through the educational process.

– Training of trainers in integrating animation to environmental pedagogical activities: a few case studies from the University of the Aegean.

– 3D environment and representation by computer.

–The use of animation in raising awareness of young people in environmental issues.

– The aesthetic in sound design animation

– The Caryatids: A collaborative production (of an Audiovisual Text) on a hotly debated issue. (Pavlos Valsamidis, Antigoni Parousi)

Animator - Graphic Designer. Born in Athens in 1959 and studied Graphic Design at TEI of Athens and Animation in Milano. MSc and PhD in animation from the University Novi Sad - Academy of Fine Arts Belgrade. She worked from 1978 - 1995 in the TV animated spots collaborating with various companies. She teaches animation at TEI of Athens, Department of Graphic Design since 1986 as a research assistant and since 1994 as a faculty member. She has worked with many animation festival as jury, as rapporteur and as organizer of workshops. She has taught in the context of ERASMUS at universities in Europe and has worked in universities international programs for creation audio-visual material. She has authored the book FRAME by FRAME (Nexus Publications 2004 and 2009) ISBN: 960-8152-03-8.

Panagiotis Kyriakoulakos, Lecturer in Computer Animation, Department of Product and Systems Design Engineering, University of the Aegean at Syros-Ermoupolis. He is teaching Animation, Computer Animation, Entrepreneurship, Digital Narrative Forms, and he is responsible for the placement of students in industry interships. Member of the Interactive Systems Design Laboratory, he is consulting advanced students, together with other colleagues from the same Lab, to produce functional prototypes during the Studio 7a course. Prior to his academic career, Dr Kyriakoulakos produced several audiovisual and interactive works in Greece and France, where he completed his PhD studies.

Born in Athens (Greece) in 1954. He Studied at the State School of Visual Arts in Braunschweig (Lower Saxony,Germany). Professor of special subjects, Institut für Bildende Kunst und Kunstwissenschaft Hildesheim University (Lower Saxony, Germany). Professor and Head of the Printmaking Dept at the Athens School of Fine Arts (ΑSΚΤ). Since 1990 he has presented his work in solo exhibitions at galleries and museums in Europe. He has participated in all international printmaking biennales and experimental cinema festivals.

He was born in Athens in 1967. He studied painting under N. Kessanlis and scenography under G. Ziakas at the Athens School of Fine Arts (1990-99). With a Greek state scholarship (1994-95) he attended painting, sculpture, model in motion and photography at the Academy of Fine arts in Seville, Spain. He got his Masters degree in Digital Arts from the Athens School of Fine Arts (2000-03). His work has been exhibited in several venues and art festivals and he was awarded the 1st prize for Olympic Truce Through Painting (2004) in Damaskus, Syria. His work is part of private collections, museums in Greece and abroad. He has collaborated with the Eugenides Foundation (Planetarium) for the making of a 3D film in the framework of the Cultural Olympiad (2004) and he has participated in many conferences and research projects. He taught at the undergraduate program of the Athens School of Fine Arts (2003-2009), at the Masters program Digital Arts, A.S.F.A. (2006) and at the Technical Educational Institute of Athens (2007) at the department of Graphic Design. In 2012, he was appointed as Assistant Professor in the Department of Audio & Visual Arts, Ionian University, Greece.

She was born in Akrata, Greece. She is an Assistant Professor in Theater Studies Department, University of Patras where she teaches film history and theory. She is also Coordinating Professor at the Free Open University where she lectures on subjects of Greek Culture.

- Ph.D in Political Science from the Athens University School of Law.

- Graduate of the School of Political Science and Civil Law of the Athens University School of Law.

- History of Art seminars in Paris.

- The Diaspora in Greek Cinema – effects and influences on the thematic development of the films of the period 1945-1986. Themelio Pub., Athens 1995.

He holds a PhD from the Polytechnic University of Madrid (ETSAΜ, 1997) and a Diploma of Architecture, National Technical University of Athens (NTUA, 1991). He is the principal of Athens-based Spiros Papadopoulos Studio since 1999.

Since 2000 he teaches Architectural design and Time Based Media at the Department of Architecture of the University of Thessaly. Since 1998 he teaches in the Inter-Departmental Programme of Postgraduate Studies (N.T.U.A, School of Architecture) specializing on the subject of “Contemporary Communication Media and Spatial Representations” and since 2005, he teaches at the Joint MA programme of the National and Kapodistrian University (UOA) “Information and Communication Technologies in Education”.

He is the Director of the Laboratory of Environmental Communication and Audiovisual Documentation (LECAD-EPEOT) of the Department of Architecture of the University of Thessaly. Since 2010 he is the scientific coordinator for the think-tank project “EscapeLab” (Laboratory of Multimodal Design and Research on Hybrid Environments).

He is actively involved with audiovisual media and multimodal design in the fields of architecture and visual arts researching the interdisciplinary interaction among contemporary urban design issues and new technology. His work was presented at several conferences, exhibitions and documentary festivals. He was the scientific coordinator and the director of the television program “Metalocus”, dealt with the contemporary perception of visual arts and urban culture (Channel Seven, 2000). Since 1999 he has been the co-editor of the international journal “Metalocus”, which has been awarded for the dissemination of architecture.

Ioannis Peikidis studied Musicology at Goldsmiths College of University of London. Since 2003 works at the laboratory of “Music Acoustics Technology” at the Music Studies Department of the Kapodistrian and National University of Athens. He is Chief Sound Engineer and Manager of the Sound Recording Studio facility of the laboratory. He teaches the subjects of Sound Engineering, Music Production, Sound Design and Music Business. Also, having build his first Home Studio in 1988, he has artistic activity that have been released in records since 1992.

Pavlos Valsamidis studied Pedagogy at the Department of Early Childhood Education, (University of Athens) and FilmDirecting at Stavrakos Film School. He holds M.A. in “Cultural Management” from the Department of Communication, Media and Culture (Panteion University). He has directed short films and specializes in the field of Audiovisual Education.

b. ANTIGONI PAROUSI, Associate Professor in the Department of Early Childhood Education, University of Athens.

Her subject is The Pedagogy of Theatrical Expression. She has a PHD in Puppet Theater, Theatrical Academy of Sofia. She has been involved in puppetry since 1976; she has worked for 15 years at the Athens Puppet Theater and has participated in a number of international puppet festivals with various performances.

10. ANASTASIA GEORGAKI, Associate Professor in Music Technology at the Music Department of the University of Athens

Anastasia Georgaki is Associate Professor in Music Technology at the Music Department of the University of Athens and head of the Laboratory of Music Acoustics and Technology of the same Department. Background in Physics (University of Athens) and Music (Hellenic Conservatory of Athens), DEA and PhD in Music and musicology (EHESS/IRCAM). She has published a lot a articles in Greek, English and French that deal with the synthesis of the singing voice, the interactive music systems, Greek electroacoustic music composers (Xenakis, Adamis, Logothetis), physical modelling of instruments, computational archeomusicology and Byzantine musicology, music technology in education and acoustic ecology technology. She has ben editor and reviewer of Proceedings of International Conferences and Special issues in Music Technology. She has also organised many international conferences in Greece-as for example the Joint International Conference in Computer music ICMC/SMC 2014 in Athens. She has participated in numerous international conferences in computer music, European projects in digital arts and collaborated with many research Institutes and Universities. She has been visitor Professor in many Music Departments in Europe. She is also a professional accordion player.

A SOUND Walk in the Spring Equinox from Theseion to the Observatory created by the students of the Music Department. Original and processed sounds of nature accompany the soundwalks between two spaces: the relevant earth and the unfamiliar outer space.

A woman scientist, disappointed by her last relationships, conducts an experiment on "Perfect Man" in her laboratory. Everything is planned, down to the last detail. Until she takes the last substance of the experiment. Will the experiment succeed?

A short story that depicts the contemporary everyday life of people who are called to cope with intense and demanding work schedules by sacrificing other parameters of their personal life.

The clothes were packed in their owner's suitcase and they were ready to travel with her. Or so she was thinking. But they had different plans!

It is a short animation film inspired by lyrics primarily written by Greek but also foreign poets who wrote poems about poetry creation. Some selected lyrics are interpreted and visualized.

The less I own, the more I can create. Willing and imagination, usually, give me the wings I need.

Somewhere in the land of lost socks an unexpected visitor from the past came to shake up the peaceful town. Is it possible for the desires and «togetherness» to survive against the stereotypes of a small society?

When cleaning is turning into neurosis, the mind is suffering from obsessions. A woman trapped by irrational thoughts, cleans frantically her house. Without knowing why, she is succumbing to compulsion. For her, this is the only way out. But for how long? The impulse is so strong that controls her brain and leads her to extremes. Is there anything that can pull her out of the impasse? Can she escape from the absurdity? The only thing she can do is waiting ... Maybe forever...

Finding my soul mate after all, and she won't even look at me. Bad break. Or could perhaps something change? I will try everything and who knows..? Really, how much would you change so as to succeed? Our first attempt concerning animation, totally experiental, based on real facts and situations and it is dedicated to all those looks that we were diligently after but we probably never succeed to get them back efficiently.

What happens to an apartment, after the night has fallen? Tenants and home appliances become involved in a dark mystery game.