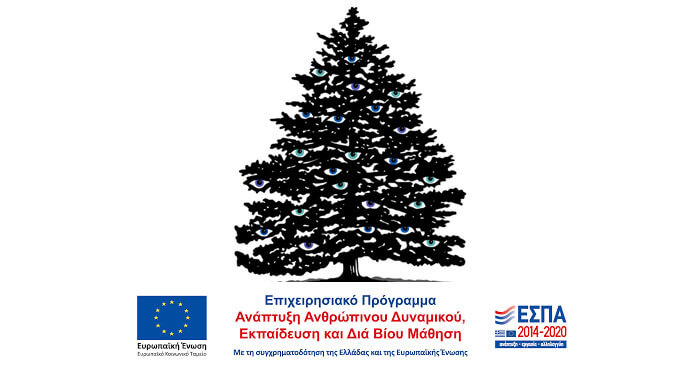 Τhe program ANIMATION & ENVIRONMENT is implemented through the Operational Program "Human Resources Development, Education and Lifelong Learning" and is co-financed by the European Union (European Social Fund) and Greek national funds. Its co-funded projects deal mostly with the improvement of education and employment in Greece. Its main targets relate to the development and promotion of human resources skills, activities against unemployment, strengthen social cohesion and social inclusion of vulnerable social groups, improvement of the quality of education & lifelong learning, awareness on environmental education, linking education with the labor market.

The entrance to the meeting and the tribute is free to the public and accessible to the people with disabilities.

Under the Auspices: Arts & Sports Organisation of Municipality of Vrilissia

In collaboration with: "Cine DRASSI" Cine Club of Vrilissia

Screenplay: Based on original Illustration by U. G. Sato

In 1993, Illustrator U.G. Sato published a series of posters to be named "Treedom".

Dolphins leaping from palm trees, panthers embedded in tree branches, the planet Earth made of leaves slowly turning yellow and dying: those are some of the most powerful images of this ecological poem.

In a beautiful afternoon, a little boy meets an unexpected friend, with whom he starts an adventure journey.

Constant change is a natural part of Earth’s life, and its interconnected systems can easily adapt to slow change. But the natural balance gets disrupted when changes happen rapidly. Our growth and prosperity are changing Planet Earth, and some of those changes may be forever.

With the ecosystem destroyed after a nuclear war, Mari, a survivor, does all she can to rebuild. When she stumbles upon a robot soldier in an abandoned city, everything changes.

Mishima lives in the shade, surrounded by worms in his underground habitat. One morning, he discovers beautiful Saiko who awakens inside a rose. Saiko is thirsty. Saiko is hungry. Saiko is cold... But Mishima, like worms, is not supposed to live in the sunlight...