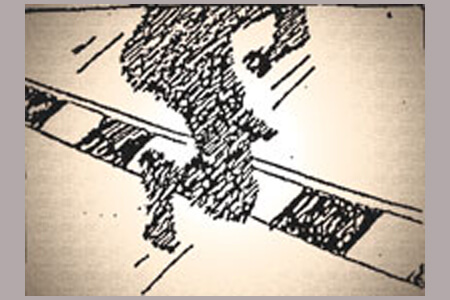 1975-1980 Studies at the State University College of Fine Arts, Braunschweig (Lower Saxony, Germany).
1980 completed his studies with the title of Meisterschyler.
1980 Award engraving of Lower Saxony.
1980-1983 Assistant Professor in the workshops lithography, rotogravure printing and the same school.
1980-2006 Member of the Association of Visual Artists of Germany and a member of the Filmmakers Association of Lower Saxony.
1988 AICA Award for Europe.
1988-2006 Professor of Special Courses at the Institute of Fine Arts and Science of Art at University Hildesheim (Lower Saxony, Germany).
1990 Member of the Center Engraving Group.
2000 Film Fellowship of the Ministry of Science and Culture
Lower Saxony.
1982/1986 Scholarships Government of Hanover.
2001 Fellowship Sparkassenstiftung for creating and publishing lithographs cutting Quensen.
2006 Professor and Director of the "Printmaking" at the Athens School of Fine Arts.
Since 1990 has presented his work in solo exhibitions in galleries and museums in Europe and Greece. He has participated in all international biennials engraving and experimental film festival.
The writing and editing art books is a continuing concern and experimentation, occupying a considerable part of his creation.

A symbolic representation of cannibalism lies within this animation, in which small and big, thick and thin fish are eating each other. This brief parable of the cruelty that characterizes human social relations is an animation film of shadow theater aesthetics.

This is an experimental animation film dedicated to the Dadaist artist and poet Kurt Schwitters. The film rhythm follows the recitation of Schwitters’ poem «Kurzer Film fuer lange Stotterer» (A short Poem for Long Stutterers).

A firework of images and sounds as reflections of urban life in the late 20th century. The work is an experimental editing of a multitude of technical and aesthetic expressions of animation.

Thirty-six animators from 36 different countries worked together to illustrate the music of «INTERNATIONALE» with images designed directly to the film celluloid. This film project is an example of international artistic cooperation in an era, during which many borders were still inaccessible.

Archaic sounds of Christian and Buddhist monasteries create the rhythmic basis of the animation’s choreography. The film is a tribute to the ritual dances of Bauhaus.

A torrent of images, sounds and colors is bursting from the film. Among them, a nightmarish shadow theater unfolds, the echo of the people’s anguish in big cities.

Icarus, after a series of unsuccessful flights and painful falls, has lost most of its legendary status. With the help of bizarre machines and being almost insane, he is trying to accomplish one last flight. An expected further fall is the result.