Life Sucks! But at least I've got elbows 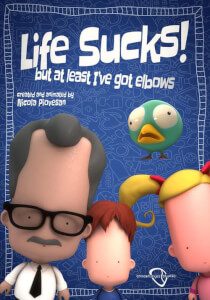 A precocious 9 year old girl pesters her philosophical father about life’s big questions. The dad gives an admirable stab at satisfying her curiosity between his son’s irreverent interjections and traumatic memories of his ex-wife as we are reminded by a bizarre squawking bird: ‘Life Sucks!’.

Nicola Piovesan is born in Venice Lido (VE) on the 1st of April, 1979. In 1999 he moves to Bologna, where he graduates at DAMS Cinema with honours in 2004. He begins shooting short films in the autumn of 2001 and has since been screened in various festivals winning about fifty awards in more than a hundred international film festivals. From 2008 to 2011 he teaches filmmaking in a higher education institute of Como and moves to Milan in 2009. In the autumn of 2011 he moves to Helsinki, Finland, and in the spring of 2013 to Tallinn, Estonia, where he lives up to date working as a freelancer in the field of video and multimedia for clients from all over the world.