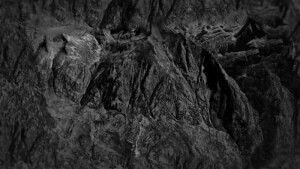 A trip towards abstraction, as an hypothesis on how mountains might have been formed.

Boris Labbé (b. 1987, Lannemezan, France) is a graphic and video artist and director who works
mainly with animation and installation. He is interested in the way space and time are ordered in
film and video production and in exploring and disrupting the patterns that result. In his projects,
classical cinematic ordering evolves towards video installation devices that synthesise major
technological revolutions of the past century with the latest digital technology. His work ties
together the device of looping and the theme of regeneration, exploring evolution and the perpetual
loss of and return to life through cyclical editing.
Labbé studied at the School of Art and Ceramics in Tarbes and the EMCA of Angoulême (École des
métiers du cinéma d’animation). In 2012, his project Kyrielle was awarded the Special Jury’s prize
for Graduation Films at the Annecy International Animated Film Festival. Simultaneously, he
developed his work as an artist and film director, and spent one year as artist member at the Casa de
Velázquez in Madrid. He has collaborated with Sacrebleu Productions to direct two short films,
Rhizome (2015) and La Chute (2017). In 2016, Rhizome won the Golden Nica award at Ars
Electronica in Computer Animation/Film/VFX. His works have been exhibited internationally
including at OK Center for Contemporary Art, Linz; Aichi Triennale, Nagoya; National Art Center,
Tokyo; Cinémathèque Québécoise, Montréal and Erarta Museum of contemporary art, Saint
Petersburg. He has shown work in more than a hundred international film festivals including
Hiroshima Festival, Trickfilm Festival and Animafest.
Labbé lives and works in France and Spain.
www.borislabbe.com