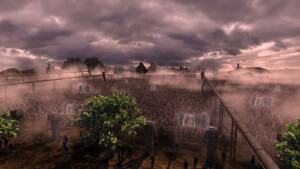 In an overpopulated world is a delicate balance between the poor ground and the advantaged residing in a mega city. The poor mass around the city is crammed with hardly any room to move. They are controlled through false promisses and religious ideals by the politicians and the religious leader of the city. They feel the seriousness of the situation, but refuse to see the reality. When a boy in the mass rebels to defend his playing spot, the balance is disturbed. The mass chooses the side of the boy and revolt. The politicians and the religious leader realize the importance of the little boy. In an attempt to turn the revolt, the boy is welcomed into the rich area. A power game is incurred to get the boy on their side. The religious leader will feel more and more the heaviness of the whole. He is faced with the dehumanization of the boy, gasps for breath and takes a decision.

After Akademie Minerva (Groningen, The Netherlands) Freark Broersma (1957) studied computer graphics. Besides being a visual artist and director, he is a teacher animation/games at the Hogeschool van Amsterdam and also the chairman of Foundation Animeetscom. Foundation Animeetscom produces animations on the cutting edge of 3D animation, virtual reality and games.