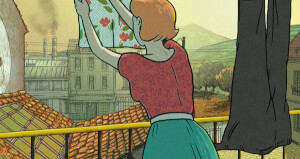 Ariadne is playing with a ball. She is interrupted, as her mother calls her inside. She loses her ball, along with her childhood. The 20th Century and Ariadne‘s life plays out on her balcony. As Ariadne nears the end of her life, she regains her lost childhood.

Claude Luyet studied graphic design in the 1960’s and then founded Studio GDS in 1970, with Georges Schwizgebel et Daniel Suter, in order to produce commissioned films and personal short films.