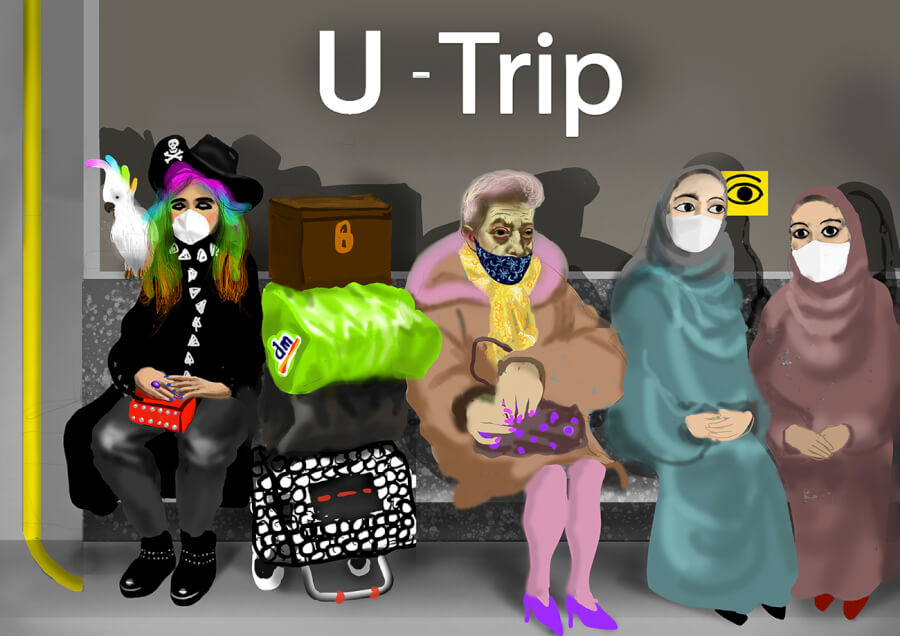 The animated film U-Trip is the story of a day in the life of Berlin’s metro system, the U-Bahn. Train cars and stations become the meeting point of a vast array of characters drawn from the rich and tattered fabric of 21st century Berlin. The story starts at 4:00 a.m. as the U-Bahn opens, with only a cleaning person and homeless woman on the otherwise deserted platform. A ticking clock builds the accelerating rhythm of the film as passengers begin filling the station, each in a hurry to fulfill their morning’s destiny, all under the watchful eye of the video surveillance camera, which is always present, but cannot intervene. The characters interact, inadvertently or purposefully, changing each other as they go, while the U-Bahn rumbles and trundles along, carrying with it moments of subterranean solitude and isolation from the streets above. The U-Bahn, the underground train, is its own world. The film’s title, U-Trip, has layers of meaning. “U” points not only at “underground” in the sense of subway or metro, but also stands for “underground culture”, a counterpart to the mainstream. The word “trip" alludes to a journey into the subconscious, into the world of hallucinations, fantasies, surrealism and hyperbolization of reality of Berlin’s drug-fueled nightlife, which often extends well into the next day. But even in the harsh light of day, the U-Bahn, the underground train, sings its own songs.
Back