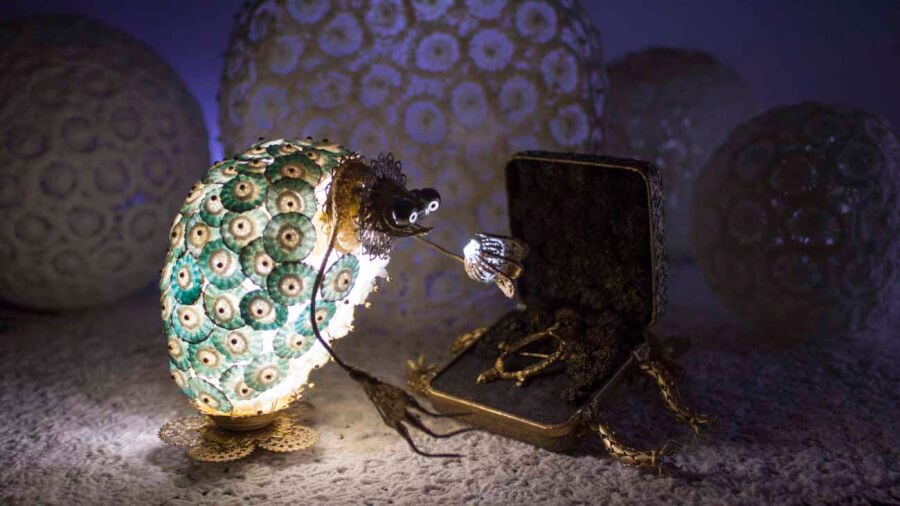 “Relation • Ship” is a film and virtual reality experience first inspired by “Ghost Ship”, a chapter from Roland Barthes' “A lover's discourse: Fragments”: Though each love is experienced as unique and though the subject rejects the notion of repeating it elsewhere later on, he sometimes discovers in himself a kind of diffusion of amorous desire; he then realizes he is doomed to wander until he dies, from love to love. Using stop motion organic characters and set design inspired by marine biology, the story consists of two separate philosophical ideas; the concept of “Assemblage” by Deleuze & Guattari, and the concept of “Plissement” by Merleau-Ponty. Merleau-Ponty states in “The Visible and the Invisible”: The world is like that band of foam on the ocean which appears immobile when seen from an airplane, but which suddenly, because it has extended itself by a line, is understood to be shimmering and living from close up. But one also understands that, seen from high enough, the amplitude of being will never exceed that of nothingness, nor the noise of the world its silence. (p.64) These ideas inform “Relation Ship” in terms of content and imagery. Set in an ocean-like environment, complex intricate details shift out of focus to form abstract shapes, similar to Merleau-Ponty’s ideas of shifting perspective in relationship to the distance of the object. Initially the audience witnesses evocative gestural performance animation of the main character, “Fish Bone Queen,” giving away precious gifts from her own body. Upon entering the virtual reality environment, the viewer is immersed in a living bodyscape. This idea mirrors the perceived natural world and fluctuations in human relationships. This experimental VR+installation project combines storytelling, philosophy, and biomorphic VR sculpture to allow viewers to experience visceral landscapes exploring the relationship between static exteriors and micro worlds hidden beneath the surface. Audio intertwines space, scale and sensations by magnifying the subtle sounds created by jewelry, chimes, three-stringed instruments, and ambient sounds. Ultimately the viewer will be left with a more intimate understanding of how worlds can be perceived differently depending on your vantage point. ------------------------------------------------------------------------------------------ This project is originally designed to be displayed in an installation setting as a Stop-motion film and 3 VR headsets which provide 3 different immersive experiences inside the main character. This installation is shown in the Documentation video below. I would like to submit the work as a film which has an optional VR element. -Stop-motion https://vimeo.com/257008559 (password:626) -VR 360 https://vimeo.com/282039428 (password:626) (view with Oculus Rift, or other 360 headset, if possible) -Documentation https://vimeo.com/268484351 (password:626)