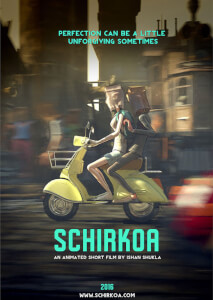 In the city of Bag-heads, a senate member faces a tough choice between political career, brothels and love for a mysterious woman. A choice that will transform his life and the city in unimaginable ways.

Ishan is an Indian artist working in the animation medium for past 8 years. After dropping out of college to pursue animation, he worked as a CG artist and Art Director in an animation studio in Singapore. He spearheaded projects ranging from TV commercials to TV series. Ishan then took a sabbatical to work on his personal projects including a short film - Schirkoa. He is now working as a CG Lead at an animation studio in India. His animation shorts and artworks have won several awards and have been featured on various online portals.