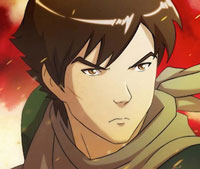 From 1987 to 1989, a teenager made an animated feature on Super-8 Kodak film, one frame at a time. This long-lost fantasy epic has now been remastered for its 25th anniversary. When the great hero Silverspear is captured, his apprentice Telamus goes on a quest to rescue him. Accompanied by an elf, a sorceress and a thief, he must journey through treacherous enemy territory, fight fearsome monsters, and test the limits of his courage.

This special screening is kindly offer by Curt Markaham.

Musa, a thirteen-year-old shoe shiner, with Yumna, undergoes destiny through their adventure of waging war during the war time. Will they manage to bring peace among the troops keeping on fighting for nothing?

This screening is kindly offered by MSV Pictures