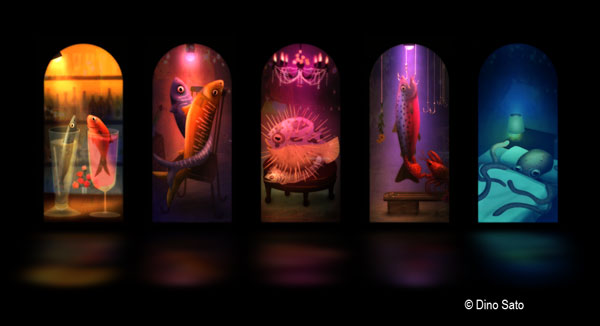 On seeing a sunset by the seaside, an old man senses that he has seen this image before.
He remembers a woman with blue eyes from the past.
He recalls her in his memory.
I wanted to reveal his feelings of guilt through the expression on her face.
I particularly emphasized to this impression through blue eyes.

When a prince from Western Libya returned to his room he took off his outside used in town.
Then he lay down and relaxed his sturdy body and sighed.
I wanted to express these moments as comical animation.
I created a “dusty” image in its entirety, because I wanted to show that he was very tired.

I visualized the poem Ithaca as a short movie. The poem states that if Odysseus had had a strong mind he wouldn’t have run into the Cyclops, the Laistrygonians and Poseidon on the way back to Ithaca. A heroine runs on the sea wearing special boots.
She is attacked by the Giants and Poseidon but manages to escape using her wits and boots.
Finally, she returns to Ithaca. (I had my friend compose the music for this movie.)

Yuri
Yuri comes from Ulysses in the Japanese pronunciation.
Yuri is a common woman’s name in Japan.
So in this animation, Odysseus was drawn as a girl who can run fast even on the sea.

Poseidon
The god of the sea who rides a sea horse.
He creates huge waves with his trident.

Cyclops
A giant cannibal with a single eye in the middle of his forehead.
He attacks by a laser beam that is emitted from his single eye.

Laistrygonians
A tribe of giant cannibals.
They attack by taking big bites.

“He drifts aimlessly down the street”.  This sentence, which is included in the poem In The Street really impressed me!
So I created an animation where a young man wanders in the streets as though he is floating.

I visualized the poem, which refers to an old book in which there is a watercolor of a beautiful boy.
In the poem the boy is described as sensual but in my work I presented him the way I wanted him to be: cheerful, modest and free.
The boy that be forgotten for a long time comes back this world momentarily, when a book is opened.
I made the work in these images.

For this exhibition, I decide to make an animation based on Monotony, a poem written by Cavafy, because I think it deals with topics that continue to be valid today and not merely a historical event.
I read about the monotonous days that are repeated day by day and sensed the feeling of weariness that this poem emits.  So I tried to express the repetition of days and the passage of time by repeating the same image and leafing through a calendar.
I want this animation of mine to serve as a warning not to waste our days by spending them monotonously.

Since the story has already been told in the poem, I found it difficult to figure out how I could tell it effectively.
I focused on the sensation created in the last scene, on the contrast between the quiet and intense love of Salome and the cool indifference of the Sophist.
I think Salome wanted him to feel her love.
So her sacrificed head remains nobly beautiful.
I hope that her absence at least makes the Sophist feel bad.
Love, Salome.

Civilians cheer the declaration of a false victory.
A peddler gets involved in the fuss.
I expressed these things in a comical puppet animation.

I tried to create the image of a traveler who, engulfed in the morning radiance of the sea, recollects…

The character in my animation is an elderly man. When he saw an opal, he remembered his former lover who had eyes the color of opal.  I tried to present his loneliness, his fading memories, the striking eyes of his former lover.
I tried to express these three things with intensity.

Though the lighted candles rapidly disappear, I expressed a positive feeling: let’s move ward without looking back at the past!

I expressed a poem as a typographical essay in motion, not as something to be read aloud or expressed in pictures. I tried to denote a vision with texts and movements.
I felt “delicate” blocks in the poem, when I read it.
I hope to visualize the “delicate” aspect that I can't describe in words.

Walls was published in 1896. I didn't understand what “wall” in this poem means.
I wonder if Walls has a deeper meaning for the Greeks.

Ancient Greeks attached great importance to funerals and saw them as preparations for life after death.
I heard that suicides, children and slaves were buried. Only citizens could be cremated.
And babies who died within 40 days of their birth were placed in the hollows of a house wall.
The ancient Greeks believed that a body without a soul was dirty.
So they cleansed dead bodies with fire.
It meant a body buried without fire was a very dirty soul.
So unclean souls tried to wriggle out of the walls of houses, creating a heavy and stagnant atmosphere around them.
I shudder and feel an aversion for their funeral customs because they are very different from ours at present.
There is a big “culture gap” between their custom and ours.

About Cavafy's poem Walls, I felt negative and blocked. But I can’t know that Cavafy really wanted to express in this poem because it was written over 100 years ago. I thought there is a “generation gap” between the “blocks” that I felt reading his poem and Cavafy’s “blocks” when he wrote it.
I was inspired by these two gaps. And it is most interesting and difficult.
So I tried to spread this gap in a movie.

Here, an old man near death, remembers his life and his beloved family.
He looks back on the past and recalls the days gone past.
He accepts his death with his happy memories.
He doesn’t think death is fear.
I tried to make a film that is easy to understand.
The warmth and loneliness of the old man. An encounter and a separation.
I wanted to show the different approach to death that the old man had in relation to that of Cavafy.

Sometimes, absurd things happen in life. Some people call it fate. Some people call it God’s mischief. But if these are the works of nature repeated over time, what do you think?
We must have a wonderful life in time. Would that be silly? For me it is very natural.
Hatred and awe for those who govern, for those who fall into decline.
There is nothing to be sad about.

I had a hard time accepting Cavafy’s poems because of the gaps between the age when he was alive and the present time, and his viewpoint regarding sex.
So I portrayed my feelings about his poetry, not about each poem.

First I was able to read Cavafy's poems in depth.
As I read on I found words that referred to homosexuality, beautiful boys and so on.
And I felt difficulties in making an animation based on his poems.
I wasn't able to come up with an idea for an animation. But I didn't have much time either.

Well, I made my animation inspired by Cavafy's poetry as a whole, and not by a specific poem.
I wanted to represent my feelings, confusing, chaotic, psychedelic, techno music and electric signals in my brain.
A main character is a woman, maybe it's me.
In the woman's brain, frustrations and confusion flicker and chemical reactions occur.
Sometimes a Cavafy is seen dimly.
I wanted to create a beautiful chaos and psychedelic images.

* Suzuki Miyuu didn't make a movie based on a poem; she made a movie that she was shocked by Cavafy's poetry as a whole.

I visualized that the love of the gods for people is unchanging, though people have lost interest in the gods.
So I created a composition with the various clouds of August.
I drew the character as simple sketch adding apathy because I didn’t want to show that whether he was aware of the existence of the gods or not.
For the background I used mainly reprinted grasslands with wide-open skies.

Ancient Greece had polytheism the same as Japan.
So found it easy to visualize this poem as Japanese.
I contrasted the friendly gods with the fear that they will be killed soon.

Nero's deadline, this poem is about a warning: that Galba rose against the tyrant Nero.
Nero who has lost his army, found himself trapped by Galba's army.
I represented this story as an animation.

“The enemy” is the way of the world, and it devours our present.
The new defeats the old.
(Watabe expressed this as a toy's transition in a game. A good reversi player was defeated by the Nintendo DS. “No other reversi player”, remarked Dino Sato)

I drew a vague memory of his precious as a rotoscope animation, based on the poem Long ago.
Well, I made my animation inspired by Cavafy's poetry as a whole, and not by a specific poem.
I wanted to represent my feelings, confusing, chaotic, psychedelic, techno music and electric signals in my brain.
A main character is a woman, maybe it's me.
In the woman's brain, frustrations and confusion flicker and chemical reactions occur.
Sometimes a Cavafy is seen dimly.
I wanted to create beautiful chaos and psychedelic images.

I wanted to draw the House of Sensual Pleasure for Fish, when I read the poem And I Lounged and Lay on Their Beds.
I thought what is fish sex without the prospect of breeding like?
I was interested in the sexual perversions of fish.
In the front rooms, they make love while the poet, Octopus Cavafy, lounges in the secret room at the back.
He is too proud to allow himself to share their sensual pleasure.
Yet, sensing the mood of his next-door neighbors, he becomes frustrated.
And his envy becomes strong but he manages to keep his pride in check finding pleasure in himself.
I thought he was the artist.